Written by Ibrahim on September 18, 2012. Posted in Latest News 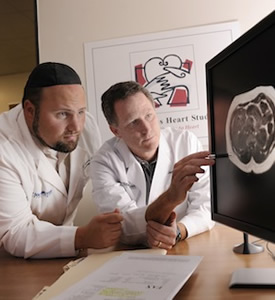 Obese individuals with excess visceral fat (abdominal fat that surrounds the body’s internal organs) have an increased risk for the development of type 2 diabetes, according to a new study by researchers at UT Southwestern Medical Center. By contrast, persons with excess abdominal subcutaneous fat (fat underneath the skin) were not at higher risk for the onset of diabetes.

The study, published in the September obesity-themed issue of the Journal of the American Medical Association, is one of the largest of its kind to assess a multiethnic population of obese people in the U.S. using extensive imaging of adipose tissue. The findings are being presented today in New York at a media briefing hosted by JAMA.

“Among obese individuals, it is not necessarily how much fat a person has, but rather where the fat is located on a person that leads to diabetes,” according to the paper’s senior author, Dr. James de Lemos, professor of internal medicine at UT Southwestern.

Using imaging methods to determine the location and function of body fat, researchers are able to identify obese persons who are at a higher risk for developing type 2 diabetes years before the disease appears.

“Understanding the biological differences between visceral fat and subcutaneous fat may help doctors to more effectively battle the obesity epidemic occurring in the United States,” Dr. de Lemos said. “The risk for diabetes varies widely among different obese individuals, and this study suggests that by predicting who will get diabetes, it may be possible to target intensive lifestyle, medical, and surgical therapies for those at a higher risk.”

The study, which collected information from UT Southwestern’s Dallas Heart Study, sampled 732 obese adults – those with a body mass index of 30 or greater – between the ages of 30 and 65, without diabetes or cardiovascular disease.

Researchers utilized magnetic resonance imaging (MRI) and dual energy X-ray absorptiometry (DEXA) to determine where fat was stored in the body. While other studies have weighed people and used tape measures to assess their body fat, this study included the largest number of obese people to undergo extensive body-fat imaging.

When participants returned for a follow-up after seven years, researchers found that 11 percent of the people sampled developed diabetes. Among the participants who had normal glucose at baseline testing, 39 percent developed prediabetes or diabetes. Prediabetes is believed to be an intermediate state between normal metabolic function and diabetes. Those who developed prediabetes and diabetes had higher amounts of visceral fat and greater insulin resistance compared to those who remained healthy.

The Dallas Heart Study is a multi-ethnic population-based study of 6,101 adults from Dallas County. Among other things, the investigation – begun in 1999 – was designed to identify new genetic, protein, and imaging biomarkers that can detect cardiovascular disease at its earliest stages, when treatment is most effective. This research, funded by the Donald W. Reynolds Foundation, involved numerous noted UT Southwestern scientists and physicians, including Dr. Helen Hobbs, director of the Eugene McDermott Center for Human Growth and Development, and Dr. Eric Olson, chairman of molecular biology.

More information about the Dallas Heart Study is available online: