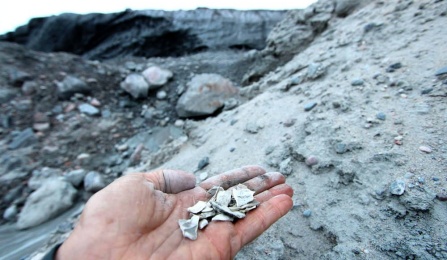 Shells from Greenland. By dating fossils like these, scientists have come up with a new technique for determining when glaciers were smaller than they are today. (Credit: Jason Briner)

It was smaller — as small as it has ever been in recent history — from 3-5,000 years ago, according to scientists who studied the ice sheet’s history using a new technique they developed for interpreting the Arctic fossil record.

“What it tells us is that the ice sheets might really respond to ocean temperatures,” he said. “It’s a clue to what might happen in the future as the Earth continues to warm.”

The findings appeared online on Nov. 22 in the journal Geology. Briner’s team included Darrell Kaufman, an organic geochemist from Northern Arizona University; Ole Bennike, a clam taxonomist from the Geological Survey of Denmark and Greenland; and Matthew Kosnik, a statistician from Australia’s Macquarie University.

The study is important not only for illuminating the history of Greenland’s ice sheet, but for providing geologists with an important new tool: A method of using Arctic fossils to deduce when glaciers were smaller than they are today.

Scientists have many techniques for figuring out when ice sheets were larger, but few for the opposite scenario.

“Traditional approaches have a difficult time identifying when ice sheets were smaller,” Briner said. “The outcome of our work is that we now have a tool that allows us to see how the ice sheet responded to past times that were as warm or warmer than present — times analogous to today and the near future.”

The technique the scientists developed involves dating fossils in piles of debris found at the edge of glaciers.

To elaborate: Growing ice sheets are like bulldozers, pushing rocks, boulders and other detritus into heaps of rubble called moraines.

Because glaciers only do this plowing when they’re getting bigger, logic dictates that rocks or fossils found in a moraine must have been scooped up at a time when the associated glacier was older and smaller.

This is exactly what the scientists saw in Greenland: They looked at 250 ancient clams from moraines in three western regions, and discovered that most of the fossils were between 3-5,000 years old.

The finding suggests that this was the period when the ice sheet’s western extent was at its smallest in recent history, Briner said.

“Because we see the most shells dating to the 5-3000-year period, we think that this is when the most land was ice-free, when large layers of mud and fossils were allowed to accumulate before the glacier came and bulldozed them up,” he said.

Because radiocarbon dating is expensive, Briner and his colleagues found another way to trace the age of their fossils.

Their solution was to look at the structure of amino acids — the building blocks of proteins — in the fossils of ancient clams. Amino acids come in two orientations that are mirror images of each other, known as D and L, and living organisms generally keep their amino acids in an L configuration.

When organisms die, however, the amino acids begin to flip. In dead clams, for example, D forms of aspartic acid start turning to L’s.

Because this shift takes place slowly over time, the ratio of D’s to L’s in a fossil is a giveaway of its age.

Knowing this, Briner’s research team matched D and L ratios in 20 Arctic clamshells to their radiocarbon-dated ages to generate a scale showing which ratios corresponded with which ages.

The researchers then looked at the D and L ratios of aspartic acid in the 250 Greenland clamshells to come up with the fossils’ ages.

Amino acid dating is not new, but applying it to the study of glaciers could help scientists better understand the history of ice — and climate change — on Earth.

The study was funded by the National Geographic Society and U.S. National Science Foundation.