Written by Ibrahim on October 14, 2014. Posted in Latest News

Annie Henderson, 69, suffers from multiple chronic ailments, including kidney failure and mitral valve insufficiency. The later turned her life into a battle for breath, eliminating almost all activities and even making sleep a struggle. She couldn’t sleep for more than 20-minutes at a time without waking in a fit of coughing. Thanks to a leading-edge procedure performed at UT Southwestern Medical Center, Mrs. Henderson is now breathing – and sleeping – easy. 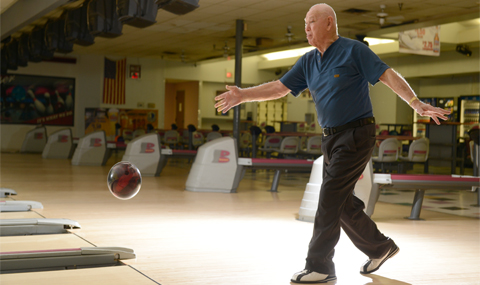 Werner Dyer, who is now 92, had his TAVR last year and was able to rejoin his bowling league and now bowls four times a week.Credit: Image courtesy of UT Southwestern Medical Center

UT Southwestern physicians perform two types of minimally invasive valve-repair procedures that offer hope for patients like Mrs. Henderson, who have incapacitating heart-valve problems but are too frail to undergo the rigors of open-heart surgeries.

Transcatheter aortic valve replacement (TAVR) is used to replace a critically narrowed aortic valve, the valve between the heart and the main artery in the body. TAVR patients’ narrowed aortic valves prevent sufficient blood flow. The TAVR procedure is a less invasive treatment, alleviating the narrowing without the need for open-heart surgery.

The procedure involving the MitraClip device repairs a valve between the upper and lower chambers of the left side of the heart, called the mitral valve. This valve may not close fully, causing blood to flow backward into the left atrium and lungs. The MitraClip is, literally, a clip that pinches the two leafs of the mitral valve together in the center so there is less backflow of blood.

Both procedures are performed by snaking catheters, typically from a blood vessel in the groin, up to the diseased valve. Patients may experience immediate improvement, and since the only incision is a small one to allow access to the blood vessel, recovery time is short.

Dr. Gualano said she has seen patients whose lives had become restricted because of their heart-valve problems re-emerging into a wider world after their procedures.

“I had a patient in his 90s who could barely walk a block, doing calisthenics in his room after his TAVR procedure. Werner Dyer, who is now 92, had his TAVR last year and was able to rejoin his bowling league and now bowls four times a week.”

“It boils down to the simple fact that these patients had no options, and now we can make them feel better and, in the case of TAVR, live longer,” said Dr. Gualano.

Demographics mean these procedures will be increasingly important in the coming years.

Sitting in her hospital room 36 hours after her MitraClip procedure, Mrs. Henderson was beaming.  Breathing is the easy process it should be once again, and there had been no coughing the previous night. “I didn’t wake up until the nurse woke me this morning,” Mrs. Henderson said, happily.