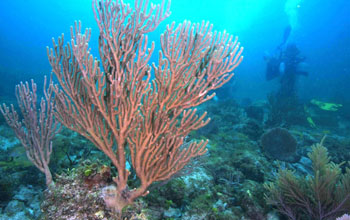 The results are from a study of corals growing where underwater springs naturally lower the pH of seawater. (The lower the pH, the more acidic.)

The findings are published today in the journal Proceedings of the National Academy of Sciences and are the first to show that corals are not able to fully acclimate to low pH conditions in nature.

“We looked in places where corals are exposed to low pH for their entire life span. The good news is that they don’t just die. They are able to grow and calcify, but they are not producing robust structures.”

With atmospheric carbon dioxide rising steadily, the oceans are absorbing more carbon dioxide, which lowers the pH of surface waters.

Ocean acidification refers to changes in seawater chemistry that move it closer to the acidic range of the pH scale, although seawater is not expected to become literally acidic.

“In our efforts to understand and predict ocean acidification and its long-term effects on marine chemistry and ecosystems, we must deal with a slow process that challenges our ability to detect change,” said Don Rice, program director in the National Science Foundation’s (NSF) Division of Ocean Sciences.

“This study shows that, with a little effort, we can find ocean sites where nature is already doing the experiments for us.”

NSF funded the research through its Ocean Acidification Program, part of the agency’s Science, Engineering and Education for Sustainability Investment.

The scientists studied coral reefs along the Caribbean coastline of Mexico’s Yucatan Peninsula, where submarine springs lower the pH of the surrounding seawater in a natural setting.

The effect is similar to the widespread ocean acidification that’s occurring as the oceans absorb increasing amounts of carbon dioxide from the atmosphere.

Led by first author Elizabeth Crook of UCSC, the researchers deployed instruments to monitor seawater chemistry around the springs and removed skeletal cores from colonies of Porites astreoides, an important Caribbean reef-building coral.

They performed CT scans of the cores in the lab of co-author Anne Cohen at the Woods Hole Oceanographic Institution in Woods Hole, Mass., to measure densities and determine annual calcification rates.

The results show that coral calcification rates decrease significantly along a natural gradient in seawater pH.

Ocean acidification lowers the concentration of carbonate ions in seawater, making it more difficult for corals to build their calcium carbonate skeletons.

“When the pH is lower, corals have to use more energy to accumulate these carbonate building blocks internally. As a result, the calcification rate is lower and they lay down less dense skeletons.”

The reduced density of the coral skeletons makes them more vulnerable to mechanical erosion during storms, to organisms that bore into corals and to parrotfish, which sometimes feed on corals.

This could lead to a weakening of the reef framework and degradation of the coral reef ecosystem.

“There are likely to be major shifts in reef species and some loss of coral cover, but if ocean acidification is the only factor there won’t be total destruction,” Paytan said.

“We need to protect corals from other stressors, such as pollution and overfishing. If we can control those, the impact of ocean acidification might not be as bad.”

In addition to Crook, Cohen and Paytan, co-authors of the paper include Mario Rebolledo-Vieyra and Laura Hernandez of the Centro de Investigacion Cientifica de Yucatan.

The research was also funded by UC-MEXUS.