Written by Ibrahim on January 12, 2013. Posted in Latest News 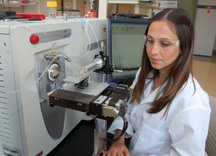 A new tool that could allow for faster, more comprehensive testing of brain tissue during surgery successfully identified the cancer type, grade and tumor margins in five brain surgery patients, according to a Purdue University and Brigham and Women’s Hospital study.

The tool sprays a microscopic stream of charged solvent onto the tissue surface to gather information about its molecular makeup and produces a color-coded image that reveals the nature and concentration of tumor cells.

Researchers analyzed specimens removed from the patients, but the goal is to one day be able to perform the analysis on intact brain tissue during surgery, said R. Graham Cooks, the Purdue professor who co-led the research team.

“We hope to eventually be able to perform this analysis during surgery to help guide brain surgeons so that the borders of tumors can be identified and the cancer status of a site can be established before any tissue is removed,” said Cooks, who is the Henry Bohn Hass Distinguished Professor of Chemistry. “We aren’t there yet, but this was a critical step in the process. It shows we’ve found easily identifiable molecular patterns that can be used to diagnose the type and concentration of cancer cells.”

Purdue researchers designed the tool and collaborated with researchers and physicians at Brigham and Women’s Hospital at Harvard Medical School to perform the study. The brain surgery was performed in the Advanced Multi-Modality Image Guided Operating suite, or AMIGO, and in standard operating rooms at Brigham and Women’s Hospital. A paper detailing the results will be published in an upcoming issue of the Proceedings of the National Academy of Sciences and is published online.

Dr. Nathalie Agar, director of the Surgical Molecular Imaging Laboratory within the neurosurgery department at Brigham and Women’s Hospital, said the findings showed the analysis method’s potential and achieved an important step in the path to assessing its value in improving patient care.

“This approach could lead to real-time, image-guided surgery without interference with surgical care and without the administration of labeling agents,” said Agar, who co-led the study. “Such extensive and detailed information about the tissue was previously unavailable to surgeons and could lead to more precise tumor removal. In addition, having access to a detailed diagnosis on the day of surgery could help the oncologist more efficiently design the course of adjuvant therapy.”

“Tumor tissue within the brain often closely resembles normal brain tissue and may have indistinct boundaries, so it is difficult to determine where the tumor ends and the normal brain tissue begins,” said Golby, who also is the clinical co-director of AMIGO. “We want to preserve as much functional brain tissue as possible, especially when a tumor is in a critical area of the brain, like that which supports movement, speaking or vision.”

Current surgical methods rely on the surgeon’s trained eye with the help of an operating microscope and imaging from scans performed before surgery.

Pathological examination of specimens taken from the brain during surgery provides the most specific information about the tissue and diagnosis of the cancer. However, this examination of frozen sections takes about half an hour, which is too long for it to be useful in examining multiple samples and guiding surgery, said Dr. Sandro Santagata, a pathologist at Brigham and Women’s Hospital who participated in the research.

“The new tool is able – in a matter of seconds – to identify and classify glioma and meningioma tumors and recognize the tumor grade,” Santagata said. “It is able to establish the same type of assessment the pathology offers, but at a pace that is compatible with surgery.”

The tool relies on an ambient mass spectrometry analysis technique developed by Cooks and his colleagues called desorption electrospray ionization, or DESI.

Mass spectrometry works by first turning molecules into ions, or electrically charged versions of themselves, so that they can be identified by their mass. Through mass analysis of the ions the contents of a sample can be identified.

Conventional mass spectrometry requires chemical separations, manipulations of samples and containment in a vacuum chamber for ionization and analysis. The DESI technique eliminates these requirements by performing the ionization step directly on surfaces outside of the mass spectrometers, making the process much simpler, faster and more applicable to surgical settings.

The researchers used DESI to evaluate the distribution and amounts of fatty substances called lipids within the brain tissue. A software program the team developed then used the results to characterize the brain tumors and detect boundaries between healthy and cancerous tissue. The researchers identified lipid patterns that corresponded to the different types and grades of cancer and concentrations of tumor cells through earlier studies of banked brain tumor tissue.

Livia Eberlin, who was a graduate student at Purdue at the time of the study and participated in the research, said the team expanded and improved the classification system for brain cancers by adding the meningioma tumor type, prior to the study.

“The classifier includes the two most common types of brain tumors, gliomas and meningiomas, which combined account for about 65 percent of all brain tumors,” said Eberlin, who is now a postdoctoral researcher at Stanford University. “The molecular information that is obtained from this kind of imaging technology allows for an analysis that is much more detailed than what other techniques can offer. We hope that it can one day help the thousands of people affected by brain cancer every year.”

The classification results for brain tumor type in the validation studies of banked tissue agreed with standard pathology methods 100 percent of the time. The researchers found that the results of the mass spectrometry analysis of samples taken from the patients during surgery agreed with pathology with very few exceptions, despite the complexity and heterogeneity of the surgical samples. The composition of samples taken from different regions of an individual tumor can differ and tumor cell concentrations are especially variable, Eberlin said.

The team plans to continue to add to and improve the classification software and to develop a miniature mass spectrometer that could be used during surgery, Cooks said. The team also will continue to examine the molecular patterns of cancerous tissue.

“Ambient ionization mass spectrometry allows us to look directly at unmanipulated tissue, just as a surgeon does, and get simple but extremely valuable molecular information,” Cooks said. “These molecules have a story to tell not just in terms of aiding diagnosis, but also perhaps in terms of prognosis and our understanding of this devastating disease.”

Brigham and Women’s Hospital has set up a mass spectrometer in the AMIGO suite and plans to begin testing the methodology for the detection of brain and breast cancer margins during surgery, Agar said.

The National Institutes of Health, James S. McDonnell Foundation, Brain Science Foundation and the Daniel E. Ponton Fund for the Neurosciences, and the Klarman Family Foundation funded this research.

Brigham and Women’s Hospital is a nonprofit teaching affiliate of Harvard Medical School and a founding member of Partners HealthCare. Through investigation and discovery conducted at its Biomedical Research Institute, the hospital is an international leader in basic, clinical and translational research on human diseases.