A specific protein once thought to exist only in the brain may play a crucial role in a deadly form of thyroid cancer, as well as other cancers, and provide a fresh target for researchers seeking ways to stop its progression, UT Southwestern Medical Center researchers report today in Cancer Cell.

The scientists found that over-activation of a certain protein in hormone-secreting cells helps fuel medullary thyroid cancer cells in mice as well as in human cells, making the protein a potentially good target for therapies to inhibit the growth of these cancer cells.

The discovery by the multidisciplinary team at UT Southwestern has implications for neuroendocrine cancers that arise in organs farther removed from the brain, including the lung and the pancreas.

“Once or twice a month, patients come to UT Southwestern, often complaining of soreness or a swollen throat,” says Dr. Fiemu Nwariaku, Professor of Surgery and a co-author on the paper. “When the diagnosis is a rare and incurable form of thyroid cancer called medullary thyroid carcinoma, it is always distressing for the patient – and for me – because we currently have no real therapies that truly extend life in these unfortunate cases.”

The only effective treatment is complete surgical removal of the thyroid, and frequently, tissues around the area of the tumor. Unfortunately, like cervical cancer, medullary thyroid cancer often is not diagnosed until it already has spread to other parts of the body.

More than 20 years ago, mutations in a gene were found to cause about 25 percent of these cancers. Genetic sequencing and screening has become an important diagnostic and prognostic tool for those families that share such mutations. But the causes for the remaining 75 percent of patients with this dangerous cancer have remained unknown and a source of frustration for endocrinologists and surgeons such as Dr. Nwariaku, also Associate Dean of Global Health.

While Dr. Nwariaku and his colleagues work to treat these patients, a laboratory in UT Southwestern’s Department of Psychiatry run by Dr. James Bibb, Associate Professor of Psychiatry and Neurology and Neurotherapeutics, was studying molecular mechanisms of brain disorders. In studying Alzheimer’s and other forms of dementia, Dr. Bibb and his colleagues made a transgenic mouse model of brain injury by overexpressing the Cdk5 protein that they thought was only in the brain.

As the team tracked the developing neurological problems, however, they noted that the mice became sick for reasons that were not at first apparent. The puzzle was solved when they discovered that all of the mice had developed the same thyroid cancer that Dr. Nwariaku treats.

Dr. Bibb and Dr. Nwariaku teamed up and launched a study of both human and mouse thyroid cancer cells. They discovered that Cdk5 was present in specific cells of the thyroid called C cells, and that the protein could escape normal cellular control and cause the cancer in both humans and mice.

Now, with the help of other UT Southwestern scientists, Dr. Bibb and Dr. Nwariaku, both members of the Harold C. Simmons Cancer Center, are making important progress in their efforts to develop new treatments for this and other more common forms of endocrine cancers. One promising example is the use of high-throughput screening for compounds that block the Cdk5 protein pathway, the researchers said.

“There are currently two FDA-approved drugs for treating neuroendocrine cancers, but neither of them blocks this specific pathway – one this study has shown to be a crucial vulnerability in the cancer, if appropriately targeted,” Dr. Bibb said. “We were surprised, but encouraged, by the finding because they link the human nervous system to disease processes that include the toughest of all foes, cancer.” 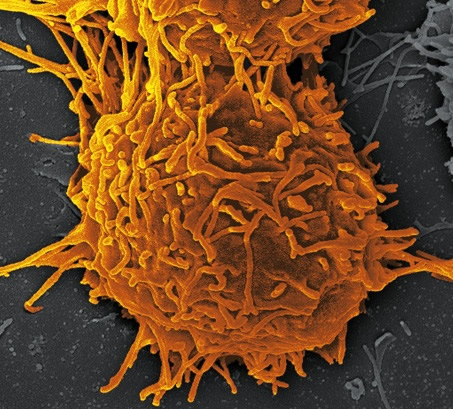 Other researchers participating in the study included Dr. James Richardson, Professor of Pathology, Molecular Biology, and Plastic Surgery, who first recognized the disease in the mouse, and Dr. Xiankai Sun, Associate Professor of Radiology, who was able to track the development of the mouse tumors using advanced in vivo imaging. The work also includes an international collaboration of scientists and physicians who contributed insight and rare samples for the investigation. The research is being funded by the American Cancer Society.

“This research is ongoing, and we are now identifying precisely how Cdk5 causes the growth and spread of these forms of cancer with the goal of discovering new drugs, which we can test in our animal model,” Dr. Bibb said. “We want to work together to translate our laboratory bench-derived insight into treatments that help cancer patients. We also think we will learn more about brain injury by studying this cancer.”