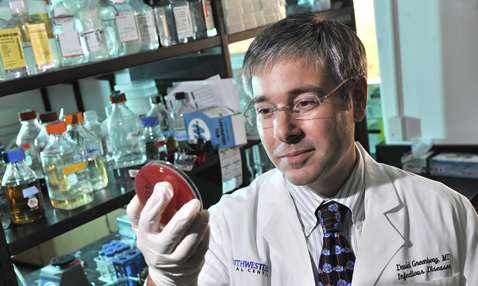 Dr. David Greenberg, assistant professor of internal medicine and microbiology, checks a sample for growth of Acinetobacter bacteria as part of a study that tested a new type of antibiotic called a PPMO. Credit: (UT Southwestern Medical Center)

The technology and new approach offer potential promise against the growing problem of antibiotic resistance, the researchers said.

The pathogen (germ) – called Acinetobacter – can cause infections from pneumonia to serious blood or wound infections, posing greater risk to people with weakened immune systems, chronic lung disease, or diabetes, according to the Centers for Disease Control and Prevention (CDC). Acinetobacter infection mainly affects hospitalized patients or those in long-term care facilities, such as those on ventilators or with urinary catheters or patients treated for open wounds. The CDC considers Acinetobacter, which is resistant to many antibiotics, one of the top bacterial infection threats in the U.S.

In the study in today’s Journal of Infectious Diseases, PPMOs designed to combat two strains of Acinetobacter reduced the number of infectious bacteria in mice by more than 90 percent. Survival of infected mice also improved with the treatment. One of the targeted strains was A. baumannii, a dangerous type that accounts for about 80 percent of reported Acinetobacter infections, according to the CDC.

“We set out to target specific genes in Acinetobacter in an effort to inhibit the bacterium’s growth,” said Dr. David Greenberg, assistant professor of internal medicine and microbiology and senior author of the study. “With infections from drug-resistant pathogens rising rapidly, there is an urgent need to come up with new approaches such as the use of PPMOs to spur antibiotic development.”

The technology that created the synthetic PPMO could be used to develop similar antibiotics targeting other bacteria and viruses, he added.

Whereas broad-spectrum antibiotics can kill off multiple pathogens, PPMOs are pathogen-specific and work by silencing essential genes that help that particular strain of bacteria or virus grow. A PPMO, or peptide-conjugated phosphorodiamidate morpholino oligomer, mimics the structure of a nucleic acid and binds to mRNA, preventing the formation of proteins. PPMOs have not been tested in humans, although a compound of similar chemical structure is being tested as a therapy in Duchenne muscular dystrophy patients.

More research is needed before the PPMOs are ready for human testing, said Dr. Greenberg, who was assisted in the study by Kimberly Marshall-Batty, a senior research associate in internal medicine.

Future studies will involve development and testing of PPMOs targeting other specific bacteria and virus types. Researchers also may try to create a PPMO that silences genes involved in antibiotic resistance.