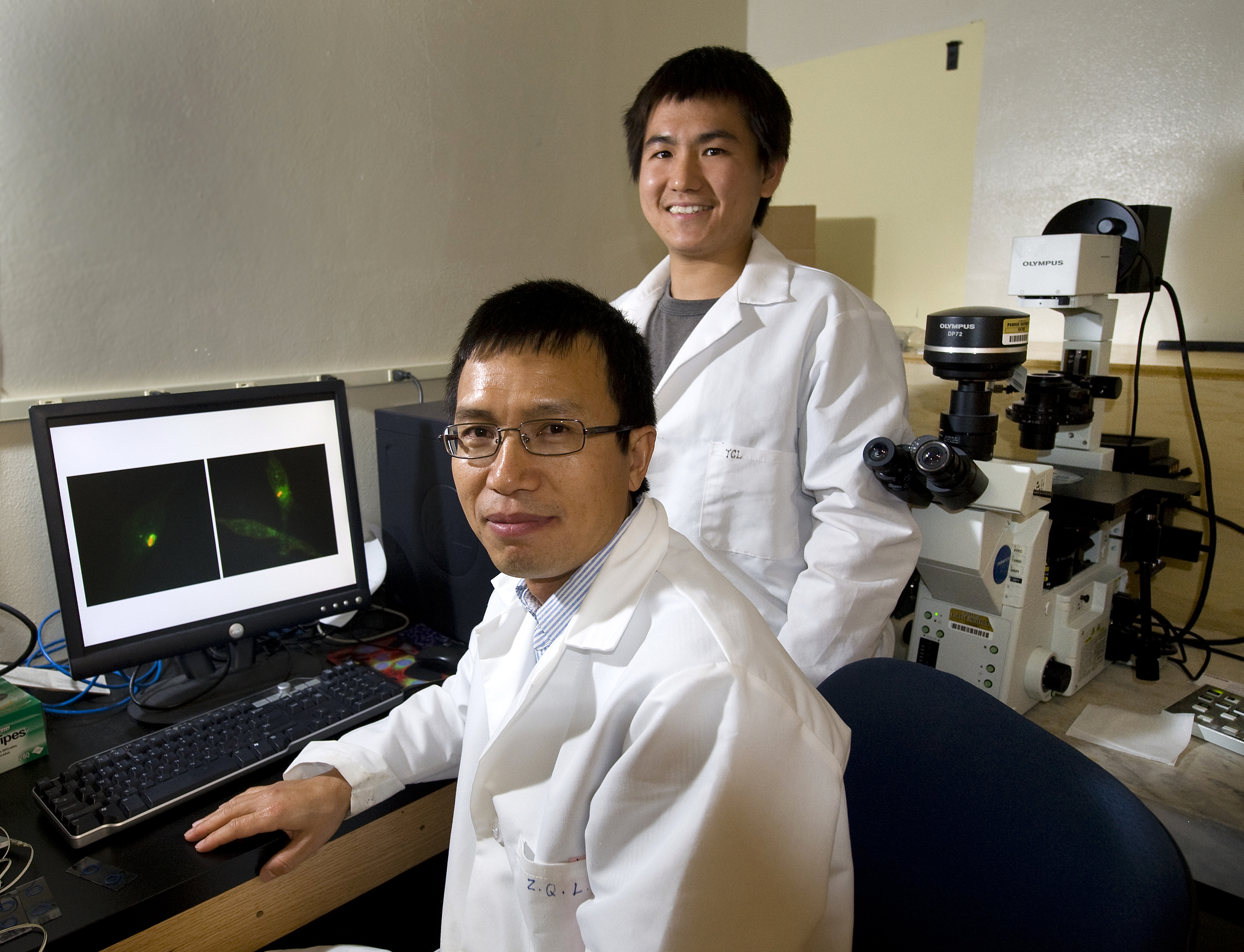 Purdue University biologists identified a new way in which bacteria hijack healthy cells during infection, which could provide a target for new antibiotics.

Zhao-Qing Luo, the associate professor of biological sciences who led the study, said the team discovered a new enzyme used by the bacterium Legionella pneumophila – which causes Legionnaires’ disease – to control its host cell in order to take up residence.

“Legionnaires’ disease is a severe form of pneumonia, and this finding could lead to the design of a new therapy that saves lives,” Luo said. “At the same time it also provides great insight into a general mechanism of both bacterial infection and cell signaling events in higher organisms including humans.”

Successful infection by Legionella pneumophila requires the delivery of hundreds of proteins into the host cells that alter various functions to turn the naturally hostile environment into one tailor-made for bacterial replication. These proteins tap into existing communication processes within the cells in which an external signal, such as a hormone, triggers a cascade of slight modifications to proteins that eventually turns on a gene that changes the cell’s behavior, he said.

“Pathogens are successful because they know how information in our cells is relayed and they amplify some signals and block others in order to evade the immune system and keep the cell from defending itself,” Luo said. “Despite our understanding of this, we do not know much about how the proteins delivered by the bacteria accomplish this – how they work. This time we were able to pinpoint an enzyme and see how it disrupted and manipulated a specific signaling pathway in order to create a better environment for itself.”

The signaling pathway involved was only recently identified, and the discovery by Luo and graduate student Yunhao Tan also provides a key insight into its process. A paper detailing their National Institutes of Health-funded work is published online in the current issue of the journal Nature.

The signaling pathway involves a new form of protein modification called AMPylation in order to relay instructions to change cell behavior and has been found to be used by almost all organisms, Luo said.

The bacterial enzyme discovered by the Purdue team, named SidD, reverses or stops the AMPylation process, he said.

“It had not been known before if the AMPylation signaling process was reversible or if it was regulated by specific enzymes,” Luo said. “Now we know that it is, and we have a more complete picture that will allow us to use it as a scientific tool to learn more about complex cellular processes. By being able to turn the signaling on and off, we can control different activities and detect mechanisms we wouldn’t see under normal physiological conditions.”

The bacterium affects the host cell’s functions differently during different phases of the infection process, tapping into signaling pathways to turn on and off certain natural cellular activities.  SidD stops the AMPylation process four hours after the start of infection in order to reverse an earlier modification that would be detrimental to the cell if left in place, he said.

“During its process of infection, the bacteria can trigger reactions that can lead to the death of the host cell,” Luo said. “Of course this is not in the best interest of the bacteria because it would no longer be able to replicate and continue infection, so it has evolved mechanisms to neutralize such reactions and keep the host cell alive.”

Luo said further investigation of the structure and function of the SidD enzyme is needed to better understand its role in the infection process and its involvement in other cellular processes.

“The more we can learn about an infectious agent, the better equipped we will be to design a therapy to fight it,” he said. “Before a new antibiotic therapy can be created, we must understand the enzyme enough to find chemicals to inhibit its activity. Further, because the bacteria have coevolved with us for millions of years, they provide some of the best tools for us to understand the intricacy of cellular processes.”