Written by Ibrahim on October 20, 2012. Posted in Latest News 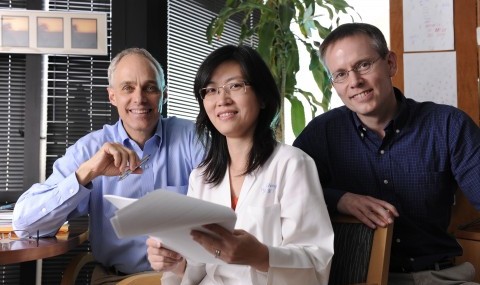 Drs. David Mangelsdorf, Yuan Zhang, and Steven Kliewer (l-r) have demonstrated that a starvation hormone markedly extends life span in mice without the need for calorie restriction. (Credit: image courtesy of UT Southwestern Medical Center)
A study by UT Southwestern Medical Center researchers finds that a starvation hormone markedly extends life span in mice without the need for calorie restriction.
“Restricting food intake has been shown to extend lifespan in several different kinds of animals. In our study, we found transgenic mice that produced more of the hormone fibroblast growth factor-21 (FGF21) got the benefits of dieting without having to limit their food intake. Male mice that overproduced the hormone had about a 30 percent increase in average life span and female mice had about a 40 percent increase in average life span,” said senior author Dr. Steven Kliewer, professor of molecular biology and pharmacology.
The study published online in eLife – a new peer-reviewed, open access journal – defined average life span as the point at which half the members of a given test group remained alive. A study to determine differences in maximum life span is ongoing: While none of the untreated mice lived longer than about 3 years, some of the female mice that overproduced FGF21 were still alive at nearly 4 years, the researchers report.
FGF21 seems to provide its health benefits by increasing insulin sensitivity and blocking the growth hormone/insulin-like growth factor-1 signaling pathway.  When too abundant, growth hormone can contribute to insulin resistance, cancer, and other diseases, the researchers said.
FGF21 is a hormone secreted by the liver during fasting that helps the body adapt to starvation. It is one of three growth factors that are considered atypical because they behave like hormones, which are substances created by one part of the body that have effects in other parts, the researchers said.
“Prolonged overproduction of the hormone FGF21 causes mice to live extraordinary long lives without requiring a decrease in food intake. It mimics the health benefits of dieting without having to diet,” said co-author Dr. David Mangelsdorf, chairman of pharmacology and a Howard Hughes Medical Institute (HHMI) investigator at UT Southwestern.
“Aging and aging-related diseases represent an increasing burden on modern society. Drugs that slow the aging process would be very desirable. These findings raise the possibility of a hormone therapy to extend life span,” said Dr. Mangelsdorf, who runs a research laboratory with Dr. Kliewer. They first identified FGF21’s starvation-fighting effects in a 2007 study.
Lead author Dr. Yuan Zhang, an instructor of pharmacology, said the study was considered risky because all involved understood it would be at least two years – an average mouse life span – before there would be any evidence of whether elevated production of FGF21 would affect longevity.
Previous research has found that FGF21 can reduce weight in obese mice. The mice that overproduced FGF21 in this latest study were lean throughout their lives and remained lean even while eating slightly more than the wild-type mice, the researchers said.
The hormone does have some downsides: FGF21 overproducers tended to be smaller than wild-type mice and the female mice were infertile. While FGF21 overproducers had significantly lower bone density than wild-type mice, the FGF21-abundant mice exhibited no ill effects from the reduced bone density and remained active into old age without any broken bones, the researchers said.
“FGF21 is not affecting their mobility. These guys are spry. They live nice, long lives,” Dr. Kliewer said. “But the decreased bone density and female infertility will require additional research to determine if it is possible to separate out the hormone’s life span-extending effects from its effect on bone,” he added.
The study was supported by the National Institutes of Health, the Robert A. Welch Foundation, the Leona M. and Harry B. Helmsley Charitable Trust, and the HHMI.
UT Southwestern co-authors are Dr. Yang Xie, assistant professor of clinical sciences; Dr. Eric Berglund, postdoctoral researcher in the Division of Hypothalamic Research; Dr. Katie Colbert Coate, postdoctoral researcher in pharmacology; Dr. Tian Teng He, senior research associate in the Advanced Imaging Research Center; Dr. Takeshi Katafuchi, instructor of pharmacology; Dr. Guanghua Xiao, assistant professor of clinical sciences; Drs. Matthew Potthoff and Wei Wei, both postdoctoral researchers in pharmacology; and Dr. Yihong Wan, assistant professor of pharmacology. Drs. Ruth Yu and Ronald Evans of the Salk Institute in San Diego also participated in the research.
Source: UT Southwestern Medical Center
Published on 20th October 2012