Written by Ibrahim on January 1, 2014. Posted in Latest News 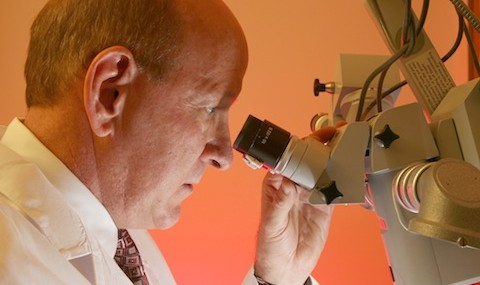 For the estimated 10 percent of patients whose bodies reject a corneal transplant, the odds of a second transplant succeeding are poor. All that could change, however, based on a UT Southwestern Medical Center study that has found a way to boost the corneal transplant acceptance rate.

In the study, researchers found that corneal transplants in mice were accepted 90 percent of the time when the action of an immune system molecule called interferon-gamma (IFN-γ) was blocked and when the mice shared the same major histocompatibility complex (MHC) genotype as the donor cornea. MHC matching is not typically done with human corneal transplants because of a high acceptance rate.

“Our findings indicate that neither MHC matching alone nor administration of anti-IFN-γ antibody alone enhances graft survival. However, we found that when MHC matching is combined with anti-IFN-γ therapy, long-term corneal transplant survival is almost guaranteed,” said Dr. Jerry Niederkorn, Professor of Ophthalmology and Microbiology at UT Southwestern and senior author of the study.

The study findings, reported in the December issue of the American Journal of Transplantation, suggest an option to improve the odds of a subsequent corneal transplant’s success for those patients whose first transplant was rejected.

More than 40,000 corneal transplants are performed annually in the United States, making this surgical procedure one of the most common and successful in transplantation. But out of that total, about 4,000 fail, with the recipient’s body rejecting the corneal graft and requiring a second operation.

A surprising finding of the study was learning that IFN-γ can act both as an immune system suppressor or activator, depending on the context of the histocompatibility antigens perceived by the immune system, Dr. Niederkorn said. Earlier studies indicated that this molecule only activated immune system rejection of transplants and that disabling IFN-γ would improve the acceptance rate. But that was not necessarily the case; researchers found that when there was no MHC matching between the mice and the transplants, and IFN-γ was disabled, the transplant rejection rate was 100 percent.

“Under those conditions, IFN-γ was needed to maintain the T regulatory cells, which suppress the immune response,” Dr. Niederkorn said.

Rather than recommend transplant matching and inactivation of IFN-γ for all first-time corneal transplant recipients, Dr. Niederkorn said this strategy would make most sense for those who have already rejected a cornea, or for those individuals believed to be at risk for a corneal transplant rejection. But before a clinical trial can be launched to verify the results obtained in mice, further study is needed.

“We are working to develop an IFN-γ antibody in eye-drop form,” Dr. Niederkorn said. “Then we need to test whether this antibody will work in animal models.”