Written by Ibrahim on February 27, 2013. Posted in Latest News 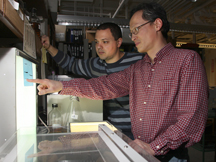 While studying a mutant strain of yeast, Scott Briggs, at right, and Paul South may have discovered a new target for drugs that could combat cholesterol or fungal diseases. (Credit: Image courtesy of Purdue Agricultural Communication photo/Tom Campbell)

While studying a mutant strain of yeast, Purdue University researchers may have found a new target for drugs to combat cholesterol and fungal diseases.

Scott Briggs, an associate professor of biochemistry, and Paul South, a postdoctoral researcher, were looking at how histones, the proteins that DNA wraps itself around, are affected by environmental factors, a field called epigenetics. When histones are modified, they change how genes are expressed and how cells behave.

One of the research team’s yeast mutants lacks a methyltransferase called Set1, which is a protein that modifies histones. In this case, the lack of the methyltransferase decreases the amount of ergosterol production. Ergosterol is the equivalent of human cholesterol, and the biological pathways that create ergosterol in yeast and cholesterol in humans are similar, with both being essential for cellular membrane formation and integrity.

“So, if we could actually design an inhibitor to this methyltransferase, we potentially could have another drug to lower cellular cholesterol or one that could work in conjunction with current cholesterol-lowering drugs,” said Briggs, whose findings were published in the Proceedings of the National Academy of Sciences.

The same yeast mutant with decreased ergosterol production was particularly sensitive to an anti-fungal metabolite called Brefeldin A, a drug primarily used as a research tool to study protein transport in cells.

Development of new anti-fungal drugs could help with difficult-to-treat fungal infections, such as the fungal meningitis outbreak last year from contaminated drugs linked with a Massachusetts compounding pharmacy.

Briggs and South are now studying whether the yeast mutant that is more sensitive to Brefeldin A would be more susceptible to other clinically relevant anti-fungal drugs.

The National Institutes of Health funded the research. South was supported through several Purdue University fellowships.